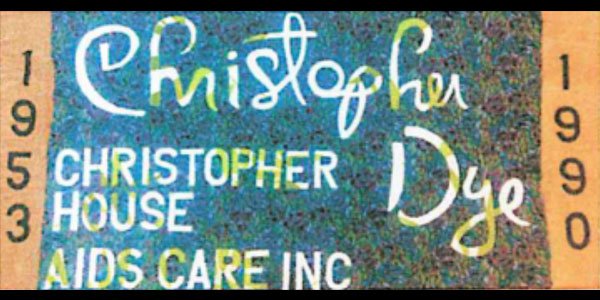 It is said, particularly in social justice movements, that we stand on the shoulders of those who came before us. And for no one in Ventura County LGBT history is this more true than CHRISTOPHER DYE.

The first President of AIDS Care, Inc. and one of the most visible faces for our community and people living with AIDS, Chris inspired and guided many in our own activism. He kept ACI’s doors open despite battling his own declining health, and in his death was the namesake of Christopher House, a nonprofit hospice that gave scores of Gay men and others comfort and dignity as they died from the disease.

In 1985 and ’86 after too many of our Gay men had already died from the disease, members of our community came together to begin the work of taking care of our brothers, led by Mark Vartanian. AIDS Care, Inc. was incorporated in 1987.

Chris, who had been diagnosed in early 1987, became involved and served as the President of ACI. He lectured throughout the county for 2 ½ years, served on the Ventura County Board of Supervisors AIDS Commission, the Ventura AIDS Task Force and received several awards for his community service.

Chris was beloved by the community, and AIDS Care remained open despite public indifference (Ventura County and its Public Health Department being a rare and vital friend) as well as disputes within the LGBT community itself.

At a time when the Ventura County Star headlined its articles on Chris “AIDS victim,” Chris was anything but. He retired from AIDS Care only months before he died on June 11, 1990. At his funeral MCC Ventura Rev. Catherine Houchins revealed Chris planned his own “celebration” that featured show tunes and other favorites, including the AIDS anthem “That’s What Friends Are For” and Greensleeves.

When I became involved with AIDS Care in late 1990, I was helping ACI’s first Executive Director Reese Welsh organize the office files and came across the trove of Chris’s writings.

They included a 1988 AIDS Care newsletter with his words that we were “living history,” and how important it was to document the times we were living in. Today, the LGBT history collection housed at Cal State University at Channel Islands include many original items from AIDS Care amid its boxes of materials, yet another aspect of his enduring legacy.

I “stood on his shoulders” and modeled my activism on Christopher Dye’s trailblazing and philosophy. And yet we never met.