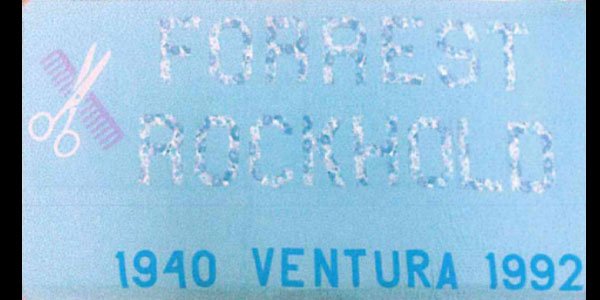 During the latter half of the 1980s and most of the 1990s, AIDS Care, Inc. (ACI) provided advocacy, services and dignity to hundreds of clients, from legal aid to the food bank to the buddy program, pairing volunteers with clients for companionship, errands and other assistance.

So it is not hyperbole to say that without FORREST ROCKHOLD, AIDS Care might not have been around after 1991 to provide such vital care to those living with HIV and AIDS in Ventura County and their families and loved ones.

A handsome, dark-haired and slender man, Forrest was born in 1940 and lived in a cottage on Santa Clara Street in Ventura, near the Farmers Market. He was a soft-spoken and immensely generous person.

As a hairstylist, Forrest was the owner of Hot Stuff Boutique, and a longtime supporter of AIDS Care, he participated in the first Haircut-a-thon  for ACI. Before being centralized at the Oxnard Beauty College in 1991, Forrest’s salon was one of the shops where the annual fundraiser took place.

But his workplace was not the only space Forrest dedicated to AIDS Care. He was also a “prime mover” behind the establishment of ACI’s yardsales. Since his home was near the high-traffic Farmers Market, he enthusiastically allowed the first yardsale to be held in his front yard.

That first yardsale brought in $1500, and was such a resounding success that Forrest agreed to host them each year.

I met Forrest when Cindy Copeland Burrell and I took on the coordination of the yardsales in 1990, when Reese Welsh was Executive Director of the nonprofit.

It was in December 1991 Reese let me know that there was such a shortfall in ACI’s finances, he wasn’t sure we could pay the January 1992 rent or not. But the $700+ we raised from the December yardsale helped to cover the bills, and AIDS Care went on to help hundreds more clients during the rest of the 90’s.

Very shortly thereafter, Forrest passed away. ACI paid tribute to him, saying in its Feb. 1992 newsletter, “AIDS Care raised thousands for our programs and services due to Forrest’s kindness. (He) has honored us and will be greatly missed. Thank you, Forrest!!” (Partly excerpted from AIDS Care, Inc. literature.)