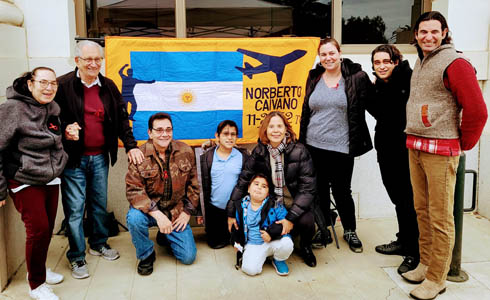 An Appreciation by Susana Rubinstein

In 1972 my dad and I came from New York because I was offered a full scholarship at CSU Northridge, and being from Argentina, my parents wouldn’t let me fly alone even though I was 20. Having been to the CSUN interview, my dad looked up in the yellow pages ‘Argentina Club in LA’ – well, there we found a family, and there I met NORBERTO CAIVANO!

We immediately became friends. It took over 6 months until we all moved to California. The first person I went to see was Norberto at the Argentina Club. He became my first friend and confidant. Norberto was a true loving friend. He wrote beautiful poetry, and would show up at my doorstep just when I needed him. He loved music, dance and Argentian folklore, like a true artist.

In 1978 I had the opportunity to go on a program to Israel for one year, but at the last minute in the airport I became terrified of flying and didn’t want to go. But Norberto came on the flight to New York with me and convinced me I was on my journey. At this time he came out to me – I was the first person he told – and he said he was wanting to tell me for the longest time at the airport.

“Since I don’t know when or where I’ll see you,” he said, “I will tell you something I have not told anyone else. You know I have been talking about ‘Donna’ – well, he is Don and I may move to New York with him. You helped me with the decision just by making me take you by the hand to do what you must.”

Norberto eventually moved to New York with Don and for 11 years he was the happiest I have ever seen him. But one day I suddenly got a call from his older brother, who told me Norberto was ill, taking Tylenol and in complete denial. We went to New York and brought him back to California. He was in and out of a hospital in Century City where the 3rd floor was for AIDS patients. The disease affected his brain.

I went almost every day after work. Norberto and I were always on a diet and I remember one time he said, “Hey, honey, look at me! I’m eating cheesecake and no guilt.” I remember him laughing so much and crying at the same time.

It was a very sad day for me in January 1991 when he died. His parents’ church would not bury him, so he had to be cremated. The church said something about AIDS contaminating the soil. It was fast and sad.

I’m grateful that Norberto was in my life. I am very close to his nephew, who carries his name, and we keep Norberto in our hearts. He was my best friend, my confidant, my everlasting love.