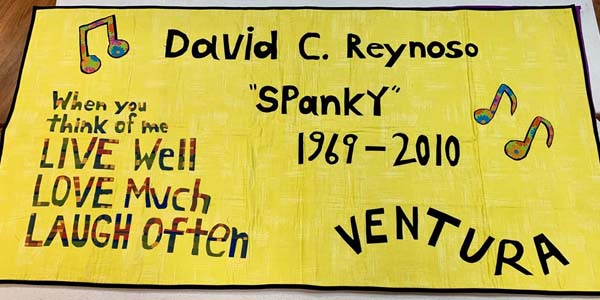 “Live, love, laugh.” Hairstylist, actor and makeup artist DAVID ‘SPANKY’ REYNOSO cradled a small white vase with those words when he died in May 2010 at the age of 40. “Those three words – that was Spank,” David Lloyd, his partner, told the Ventura County Star.

Spanky was a familiar face on stage, appearing in musical theatre and doing hair and makeup for professional productions. “I loved him in A Funny Thing Happened on the Way to the Forum,” friend Ziah Von Heyneman posted on social media after his death.

TV producer Mel Swope, who directed Spanky in Forum at Ventura College, said Spanky played the lead role of Pseudolus. “Spanky was his own person. He knew I was particular about the script, but he loved to titillate the audience.” Intermission had Swope backstage warning Spanky to stop ad-libbing.

Spanky burned the candle at both ends doing theatre, working full-time as a stylist and performing in drag at Paddy’s, singing “It’s Raining Men” in his royal blue gown and many other numbers.

Spanky’s father Jesse and brothers Ben and Rick tended to him during the last weeks of his life at Ventura County Medical Center, when he grew too weak to communicate. Jesse said Spanky had appeared in high school performances and had a wonderful voice, but he had not seen his eldest son in the twenty years since he left the Central Valley at 19.

When he heard of Spanky’s illness, Jesse came to VCMC and at the gift shop got the 6” vase that reflected words printed on a sign in the Reynoso family room – that his beloved mother Petra, who died in 2009, had hung there.

His ashes were buried next to Petra’s in Woodlake, and friends told stories that celebrated his life. Michael Kohli said that he and Spanky found out their birthdays were a day apart. “That sparked our forever friendship,” Michael posted. “Every year (on their birthdays) we would do two shots at 11:59 and 12:01. One year he made a big cake and brought it to the bar.”

After Spanky’s passing, the little white vase was filled with roses and surround-ed with candles at Paddy’s, and friend Ruby Diamond commissioned the panel that bears the words: Live. Love. Laugh. “He made a lot of people happy,” said Spanky’s father. “That’s what really matters.”