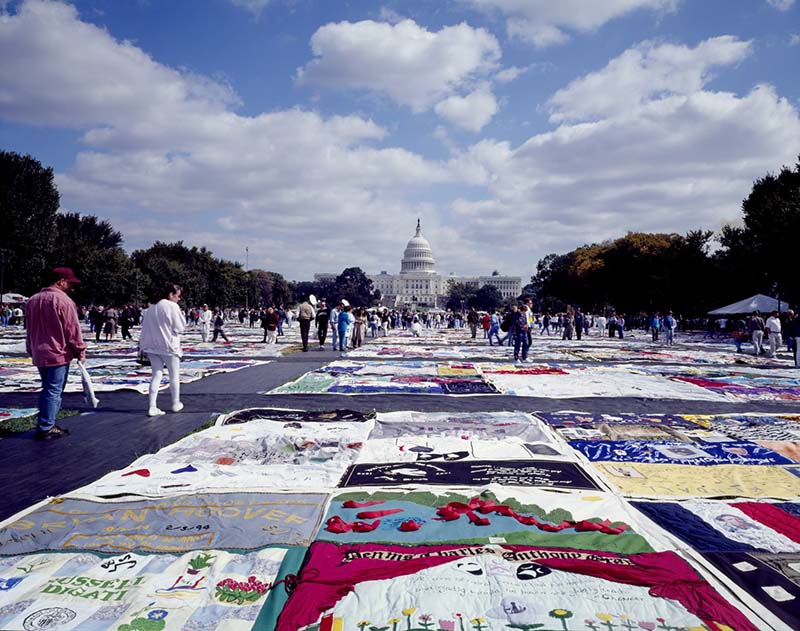 After a spike in Ventura County more than doubled HIV diagnoses between 2016 and 2017, the Quilt Project Gold Coast — which encompasses Santa Barbara and Ventura counties — has been working to get the number down to zero. To raise awareness that HIV/AIDS remains a potent danger in the community, in October, Gold Coast is bringing back two of the quilts made to remember the thousands of people who died in the U.S. AIDS epidemic before treatments were developed.

Diagnoses in Ventura County dropped after 2017, but even so, 12 people died in 2018 in Ventura County of AIDS, the acquired immunodeficiency syndrome that can result from contracting HIV, or the human immunodeficiency virus. In Santa Barbara County, five people died of AIDS last year. In 1994, AIDS was the leading cause of death among Americans ages 25-44, according to hiv.gov. Gold Coast organizer Keith Coffman-Grey reminded that the original quilts were three feet by six feet in size: “Almost the size of a grave,” he said. When the AIDS Memorial Quilt was displayed in its entirety in Washington, D.C., in 1994, it covered the entire National Mall.

New diagnoses of HIV continue to occur in Santa Barbara County, 32 in 2018; the rate of infection averaged at about 28 over the past five years. Of the 32 cases in 2018, 10 patients had both an HIV and AIDS diagnosis, which meant their T-cell count was seriously low when they were tested. “Dual diagnosis of HIV/AIDS is concerning,” said Michelle Wehmer of Santa Barbara County Public Health, “because the AIDS diagnosis could have been avoided if HIV had been diagnosed earlier.” The department recommends that people being tested for HIV be screened for all sexually transmitted infections, and vice versa.

Coffman-Grey, who has long been an AIDS activist in Santa Barbara. worries that young people wrongly assume HIV is no longer a problem. “They think they can take a pill, and it’ll be fine,” he said. The PrEP, or pre-exposure prophylactic, pill had proven 95 percent effective in keeping the virus at bay, but it’s expensive and people have to take it daily for it to work, he pointed out. Too many skip days and lose the protection. He added that hospice care-workers have been alarmed that they are seeing AIDS patients again after a multi-year hiatus.

Both Ventura and Santa Barbara counties have needle-exchange programs to prevent HIV transmission through injected-drug use. “In fact, Ventura simply asks how many they need that week, rather than requiring an exchange,” Coffman-Grey said. “But it’s mostly gay, sexually active young men getting infected,” he said, “and a few women, too,” who don’t realize their partners are having unprotected sex. He’s also concerned that older men are not being as careful to use condoms as they used to be.

The Pacific Pride Foundation offers hepatitis C and HIV/AIDS testing and counseling in Santa Barbara and Santa Maria for free or a low cost. Pride also has a mobile testing van that is in Lompoc on Tuesdays. Uninsured patients can also go to the County Healthcare Clinics and Neighborhood Clinics for screening. Planned Parenthood offers testing and diagnosis of STIs and HIV.

4•1•1 | Two large, 12′ x 12′ AIDS quilts will be placed at the courthouse in Santa Barbara during the week of October 14-19 — the increasingly fragile cloth remembrances will be brought here from storage in Atlanta, Georgia. Newer quilts will be on display as well. In honor of AIDS Awareness Month, the quilts will be displayed at City Hall on October 29.