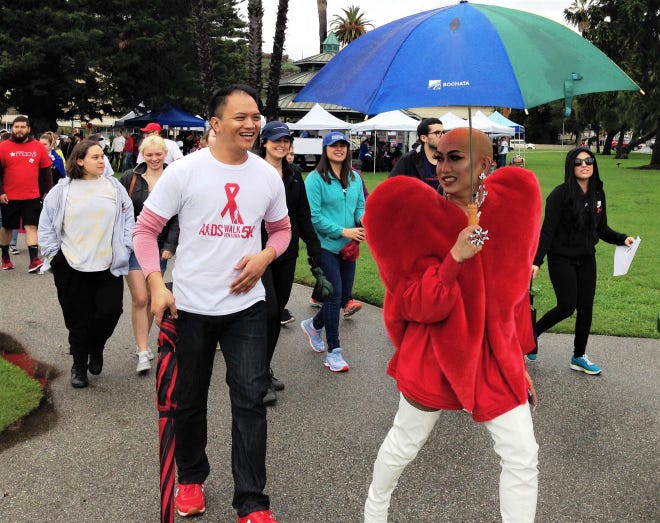 “Not having these events, we’ve taken a major hit,” said Neil Coffman-Grey, a Quilt Project Gold Coast board member. “And it’s all because of COVID.”

The nonprofit was founded in 2018 in response to an increase in HIV/AIDS infections in Ventura and Santa Barbara counties. It makes memorial quilt panels to raise awareness of HIV/AIDS, to commemorate those lost to the disease and to help survivors cope with the deaths of their loved ones.

The group’s biggest fundraiser of the year, its annual Harbor Cruise with Island Packers Cruises in Ventura, was canceled last year because people wouldn’t have felt comfortable in such close proximity on board a boat, Coffman-Grey said.

“Not having these events, we’ve taken a major hit, and it’s all because of COVID.”

Whether this year’s Harbor Cruise will be held is up in the air, he said.

Meanwhile, he said, a philanthropic foundation and a corporate sponsor have both informed Quilt Project Gold Coast “that their money is going to go to (the fight against) COVID this year because of the immediate need.”

Quilt Project Gold Coast has had to suspend its twice-a-month group quilting bees because of COVID-19 concerns, he said. The quilts are now made by people home alone, he said.

“It’s very sad,” said Coffman-Grey, who was diagnosed with AIDS in 2003. “The quilts are the heart of what we do.”

The group has also had to stop displaying the quilts in public, which also brings in some donations, he said.

Everyday donations to the nonprofit are down too, he said, speculating it’s due to many people being out of work because of the pandemic.

“We’re looking at a much lower operating budget,” he said. “Sadly, that impacts our AIDS awareness campaign, social media campaigns and things like that which cost money.”

He declined to say how much the budgets were.

Coffman-Grey said he sees a kind of cruel irony that a deadly pandemic, COVID-19, is financially ailing local nonprofits devoted to the fight against a deadly epidemic, HIV/AIDS.

“Yes,” he said. “And it’s notable how quickly a vaccine was developed (for COVID-19), when we’re still waiting for a cure for AIDS,” which has been infecting people decades longer.

The pandemic and the epidemic

Previously classified as a pandemic, HIV/AIDS is now categorized by the World Health Organization and the Centers for Disease Control and Prevention as a less-widespread epidemic.

As of late 2019, some 32.7 million people had died worldwide from AIDS-related illnesses since the start of the epidemic in 1981, according to unaids.org.

Ornelas said Ventura County had 724 reported HIV/AIDS-related deaths as of the end of 2018. He said he didn’t know what year such deaths began being tracked by the county.

There is a medical treatment for HIV, the virus which can cause AIDS. Antiretroviral therapy consists of taking a combination of HIV medications daily, according to hivinfo.nih.gov. It is not a cure for HIV.

COVID-19 was declared a pandemic by WHO in March. Some 2.33 million people have died from COVID-19- related illnesses globally, according to the Johns Hopkins University Coronavirus Resource Center.

They include 696 people in Ventura County as of Wednesday, according to county public health data.

COVID-19 vaccines began being rolled out and administered in December.

Donations down due to COVID-19

Diversity Collective VC, which promotes advocacy, education, mental and physical health for the Ventura County LGBTQ community and those affected by HIV and AIDS, took in far less donations in 2020 than it did in 2019 because of COVID-19, nonprofit leaders said.

“Our main revenue source is the events that we put on,” said Genevieve Flores-Haro, president of the Ventura-based group.

But due to the pandemic, the in-person events have been turned into virtual events, which bring in far less donations, she said.

For instance, last year’s annual AIDS Walk Ventura County, one of the organization’s signature events, was a virtual one which generated less than 50% of the donations that 2019’s in-person walk did, she said.

For the group’s virtual Pride Festival in August, the collective allowed small businesses hit hard by the pandemic to advertise on-line without having to make donations, she said. Some did anyway, she said.

Besides donations, the collective also has a contract with Ventura County Behavioral Health, she said.

Flores-Haro stressed that even with the lesser donations, Diversity Collective VC has managed to continue providing its services, though she concedes it’s been a challenge.

Those services include free anonymous monthly HIV screenings adhering to COVID-19 protocols – masks and social distancing – at the nonprofit’s Community Resource Center, 2471 Portola Road, Suite 100 in Ventura. Another service it has continued is providing HIV “Stay Safe During the Pandemic” at-home packets with condoms, lubricant and more, but strictly on a drive-in basis.

“It’s not lost on us that as a community that has undergone the AIDS pandemic in the ’80s and ’90s, and now having to weather another pandemic, the folks who we work with who are HIV positive have a particular vulnerability to COVID” because of their weakened immune systems, Flores-Haro said.

Vanessa Bechtel, CEO of the nonprofit Ventura County Community Foundation, said she knows it’s been a financially tough time for many nonprofits that are event-driven such as Quilt Project Gold Coast and Diversity Collective VC.

However, the foundation, in contrast, has seen more than 10,000 first-time donors in response to the COVID-19 crisis, she said.

“I think that because of the pandemic, there’s a growing sense of compassion and a desire to help serve others,” said Bechtel, whose nonprofit promotes and enables philanthropy in Ventura County.

She said the new donors have all earmarked their contributions for COVID-19 services, such as the Rapid Response Fund for Ventura County, which the foundation helped launch in March in response to the pandemic.

AIDS is a very important issue, we cannot lose sight of that during COVID.

The foundation has already done so, last month giving $2,500 to the Diversity Collective for general operating support, Bechtel said, adding she plans to personally donate to Quilt Project Gold Coast as well.

“AIDS is a very important issue,” she said. “We cannot lose sight of that during COVID.”

To donate to Quilt Project Gold Coast, go to its website, quiltprojectgoldcoast.org.

To donate to Diversity Collective Ventura County, go to its website, diversitycollectivevc.org.